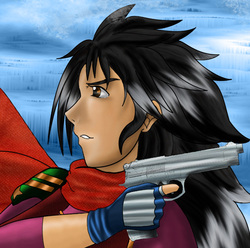 Sam Dogra is a recently qualified junior doctor working in the NHS in England. Between reviewing patients, taking blood and getting grilled by consultants, she also writes fantasy fiction and is a fantasy artist. Chronicles of Azaria is her first novel series. Her favourite authors include J.K. Rowling, Philip Pullman, Garth Nix, Cornelia Funke, Julia Golding, Mark Robson, Alison Croggon and Alison Goodman.

My main sources for inspiration are video games, anime and books. Game-wise, I'm particularly influenced by the Final Fantasy series, the Tales...series, Tomb Raider, Prince of Persia, Okami, and some lesser known games like Eternal Darkness (Gamecube) and Darkened Skye (Gamecube/ PC). Anime that have influenced me include Black Cat, Romeo X Juliet, The Slayers (the original, NEXT, TRY, REVOLUTION and EVOLUTION-R), X/1999, Full Metal Alchemist, Vision of Escaflowne, Sorceror Stabber Orphen, Love Hina, and probably more I've forgotten! I've also gleaned lots from my favourite books (The Books of Pellinor by Alison Croggon, Faerie Wars by Herbie Brennan, Sabriel by Garth Nix, The Companions Quartet, Dragonfly and the Darcie Lock series by Julia Golding, Eon by Alison Goodman, The Edge Chronicles by Paul Stewart and Chris Riddel, The Princess and the Captain by Anne-Laure Bondoux, The Dreamweaver Legacy series by Mark Robson).

And if you want to see more creative stuff: http://indigolightning.blogspot.co.uk/

The Binding - Chronicles of Azaria, Book One 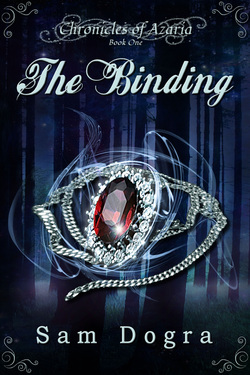 What do you do when you can't trust your heart?

All seventeen year-old Eliza Bryant wants is to avoid a Binding— the ancient spell that forces couples into a lifelong bond. It cursed her sister, and for the last two years it’s tried to claim her, too. Her monthly hiding ritual worked brilliantly, until the night she ran into Ryan, a mysterious bounty-hunter. Now Bound to him, Eliza must spend every moment at his side, else she’ll transform into an Unbound; a lifeless husk without mind or soul.

Unfortunately, Ryan’s not looking to settle, and Eliza is dragged into his crazy life on the run. Still, she’s not going to take this lying down. Between grappling with the false feelings conjured by the spell and fleeing an unseen enemy, she plans to find a way break her Binding; a feat nobody’s achieved in two thousand years. The key to her freedom lies closer than she thinks...and it’s deeply connected to Ryan’s past.

Text and pictures above supplied by Sam Dogra